An application’s deployment lifecycle is parameterized in boxes using variables. Parameters denote dynamic data like database connection strings, endpoints, and application settings. Since you can’t know all possible values for the different environments and you don’t want to hard-code sensitive information like passwords, it’s a good idea to define such data as variables.

It works like this: define variables in box automation. Then refer to them in box event scripts with Jinja templating syntax.
For each environment like development, staging, production, you can customize deployments by passing different values to the variables. Cloud Application Manager executes the event scripts replacing variables with the values you give at deployment time.

In a box management page, under Code tab, click New and select a variable type, then specify a name and a value.

Mark variables like port, text, file, options, password, and number as required if you expect a custom value before deploying. Say you define a database box that needs a username and password to connect. At this point, you know they’re necessary, but can’t get their values till deploy time. So mark them as required.

A few settings such as Public, Private, and Internal determine variable privacy.
Variables have public visibility as default.

Boxes support eight variable types depending on the data type or usage like any programming language. They are box, binding, port, text, file, options, password, and number. See below for each type details.

Add a box type variable to consume the configuration of another box in your workspace. This is how you stack to achieve multi-tier applications. Child boxes within deploy on the same virtual infrastructure as the parent box.

Stack as many child boxes as you like, as long as they match the parent box Windows or Linux type. To understand the order in which parent and child box scripts execute, see Event Execution Order. 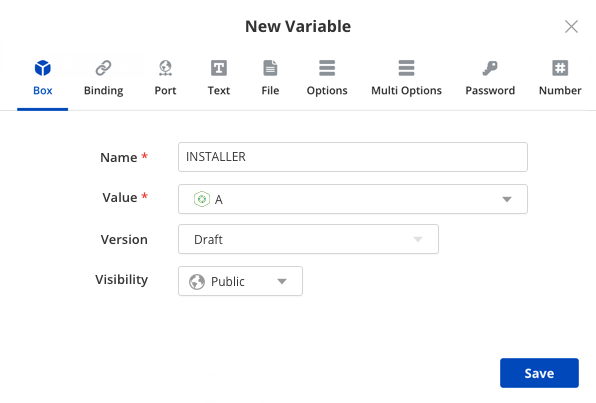 Boxes can have versions, which are snapshots of stable configuration. When you stack a box, select a specific version if available or use its latest configuration.

Here you have a box variable called INSTALLER that points to the Package Installer box as shown.

You can access all the variables of the Package Installer box with this syntax:

You can also override their values within the context of the parent box.

For example, to access the UPGRADE_ON_INSTALL variable in the Package Installer box from an event script in the parent box, you can do as follows:

To define a binding, add a variable of type Binding. Then set its criteria in one of two ways:

Apply Jinja templating to binding variables in the box configure script to get instance connection data or other values.

In this example, for a binding called bindingA, we can get the connection data for all instances that bindingA points to with this Jinja reference:

To get value of a variable named connection_string, we apply this Jinja to look up the binding to the first deployed instance:

As an alternative to Jinja, you can do the same thing with text expressions. For example, since CloudFormation boxes don’t support event scripts, you can use text expression variables to process binding connections.

Use it to store TCP/IP port information. Access it from event scripts using Jinja just like text variables. At deploy time, Cloud Application Manager uses this port to open a connection to the instance if you select the Automatic security group option in the deployment profile. 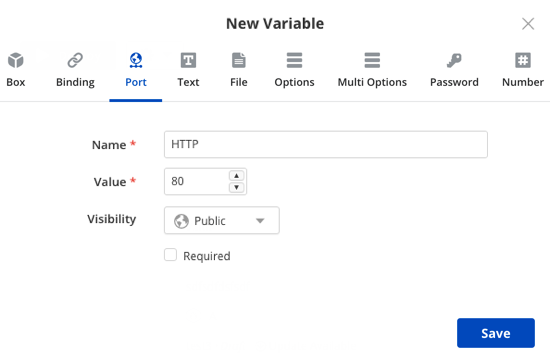 Use this type to store strings like usernames, paths, file names, connection strings, endpoints URLs, binding values, and so on. 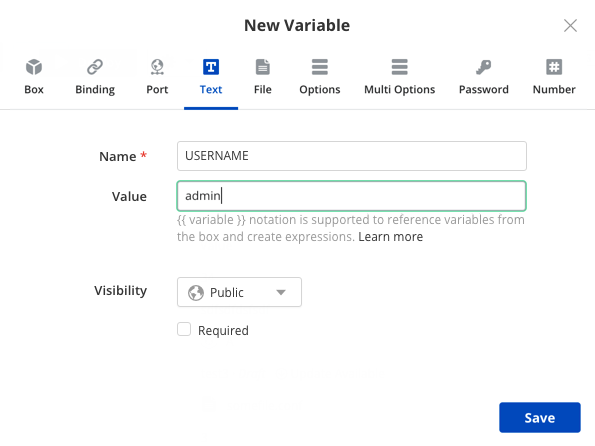 Specify them in plain text or as expressions.

Use it to upload a file with binary or ASCII data. Files usually store configuration data used by applications. 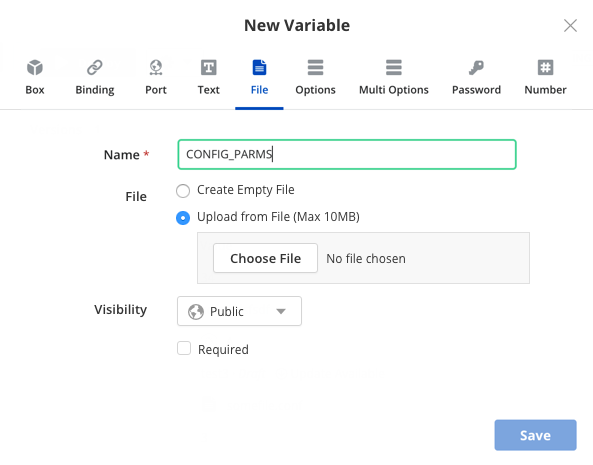 Say you upload a configuration file to a file variable called CONFIG_PARAMS. And its code refers to some variables on the box.

To access this file from an event script on the box, use a command like cURL or WGET to download and write to the file in the virtual machine file system.

Use it to provide a drop-down of values for users to choose from when deploying the box. 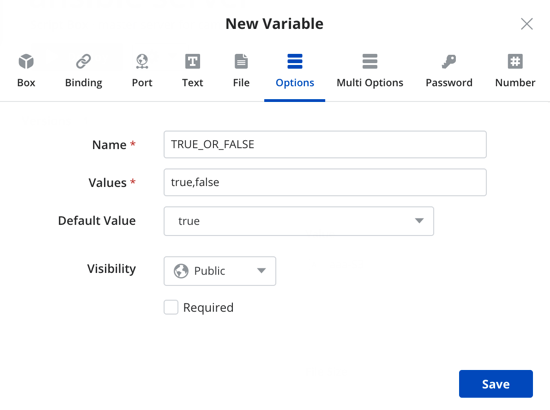 Here’s a variable called TRUE_OR_FALSE with two possible values, true and false.
Access the option variable from an event script just like you would the text variable.

Use it to assign a sensitive string value that’s hidden by the Cloud Application Manager interface. Access it just like text variables in event scripts. Typically, you use passwords to give admin accounts access to the virtual machine or applications in it. 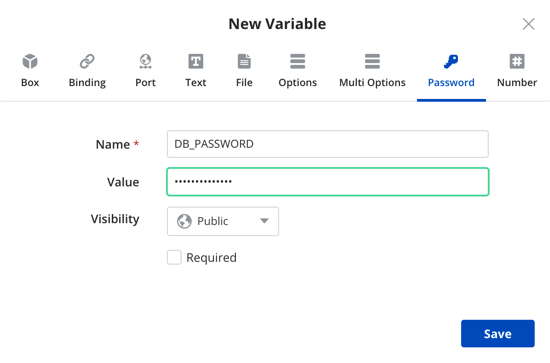 This script returns the value of a password variable. 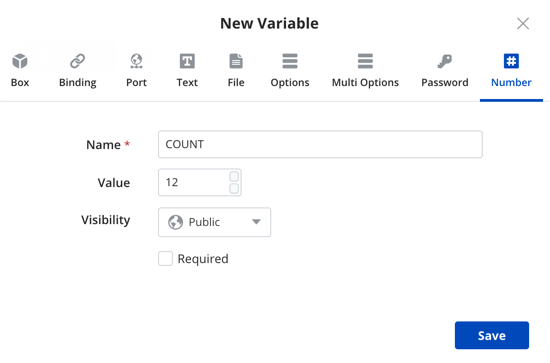 This script returns the value of the number variable.

For issues related to API calls, send the request body along with details related to the issue.

In the case of a box error, share the box in the workspace that your organization and Cloud Application Manager can access and attach the logs.